Is NYC Tap Water Safe to Drink? 6 Reasons to Install a Filter Today! 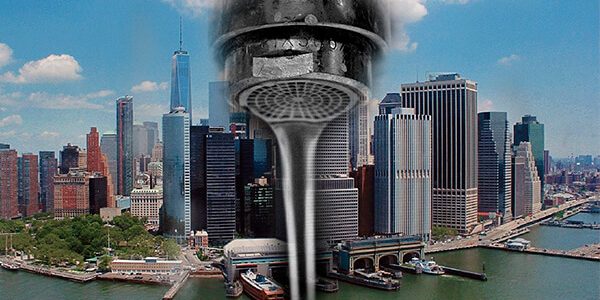 New York tap water has long been famous for its quality. New York is one of the five major American cities where most of the water is not chlorinated, thanks to numerous watershed protection programs. Since 1993, the city has invested more than $1.7 billion in these programs. In addition, every year, the city’s environmentalists conduct more than 500,000 analyses of drinking tap water from all the city’s sources – numerous test points are located in all five boroughs of New York City. So, can you drink NYC tap water without filtering?
The recent scientific researches confirm that NYC tap water can become contaminated once it moves into the pipes that supply individual buildings, homes, and even schools. Read our article to find out six reasons why it is necessary to install a water filter to make tap water in New York City safe to drink.

Over the years, the volume of plumage found in municipal drinking water has decreased. But a recent study indicates that a small percentage of the home water now contains hazardous materials that are exceeding federal limits.
Notwithstanding clean water, New Yorkers have to keep an eye on lead exposure: high-acidity and low calcium carbonate corrosive water is more prone to lixiviate the lead from the pipes. The best way to ensure that your New York tap water is good, lead-free and that there is no brown tap water is to install a fine water filtration system from High Water Standard company. We offer great prices and affordable filter maintenance services.

Have you ever wondered if there is fluoride in NYC tap water? Water fluoridation in New York City began in the late 1940s, to protect children under the age of eight from caries. Short-term studies prove that fluoridated water helps prevent tooth decay in a small percentage of very young children, but has absolutely no effect on the caries in adolescents and adults.
But today fluoridated water provides a huge risk of fluorosis because modern humans get fluoride not only from the water, but also toothpaste, floss, mouthwash, and vitamin supplements. Long-term studies have shown that fluoride is extremely dangerous to ingest. The American Dental Association advises children under the age of two not to use fluoride toothpaste, and Time magazine, in 2010, included fluoride in the list of the top 10 most dangerous toxins in the household.

Despite the high quality, NY water contains added chlorine to disinfect it during distribution. New York also has some of the oldest buildings in America, which means that no matter how much effort is put into the water, if your pipes leak lead, it will end up in your drinking water. Let’s explore if you can drink tap water in NYC if it is chlorine-enriched.

NYC tap water chlorine-contaminated water can cause a number of health problems, including heart disease, atherosclerosis, anemia, high blood pressure. In addition, chlorine dries the skin (remember the feeling of tightness of the skin after swimming in a pool), destroys the structure of the hair (it begins to fall out more, becomes brittle, dull, and lifeless), and irritates the mucous membrane of the eyes.
US epidemiologists conducted a study: they compared a map of water chlorination with a map of the distribution of diseases of bladder cancer and digestive organs. They found a direct correlation: the higher the chlorine content in water, the more frequent the occurrence of these diseases. Therefore, in order to make tap water in New York safe to drink, we all should consider buying water purification systems.

The Environmental Working Group (EWG) has published details on toxic chemicals that are present in drinking water systems across the country. The data from the Department of Health and EWG research shows that drinking water in New York City does not fully meet health guidelines.
Six different contaminants associated with cancer have been found in the water. Their levels are significantly higher than the recommendations set out by health authorities but do not exceed the limits set by law. In other words, there are slightly more chemicals in the water, including chloroform, bromodichloromethane, and dichloroacetic acid, than are desirable, but not so many as to become a serious problem for city authorities.
But even a small amount poses a health risk to New Yorkers. For example, according to the recommendations of health authorities, the amount of chloroform in water should not exceed the proportion of one billion, which, according to EWG, corresponds to one cancer case per million inhabitants. The level of a chemical substance in New York City water is 30.9 per billion, which, you will agree, is a little frightening.

Kids are at the greatest risk when consuming tap water. One fact, for example, is that they typically drink more water than we do per pound of body weight. Moreover, babies younger than one years-old, who are served tap water consume around three to four times more than the estimated volume of tap water.
There is no hard data demonstrating how many American children have become ill from drinking water contaminants. Nevertheless, the EPA reports that about 5.8 million children that were drinking from public water systems, in 2007, either failed to monitor and filter water adequately or delivered tests that showed water containing at least one contaminant at unsafe levels.
Remember, drinking chlorine contaminated water and swimming in chlorinated pools increases the risk of respiratory problems, such as asthma, particularly in children.

Can you drink tap water in NYC? This is a common question for many scientists. Chlorine can pose serious risks to your cardiovascular health if incorporated into your water supply. Dr. Joseph Price, a scientist, conducted a test. He used two groups of chickens, as test subjects, to determine the basic cause of atherosclerosis, which eventually leads to strokes and heart attacks. A pair of chickens consumed chlorinated water, while the other consumed water without it.
Reports verified that all chickens consuming contaminated water displayed some heart and circulatory diseases. Throughout the winter, these chickens often showed poor health, such as low blood pressure, diminished movement, and shivering. The chlorine-free group grew significantly faster and showed strong health.

Nine years ago, a Reddit user uploaded the images of what he found by adding an H&E stain to New York tap water. Microscope pictures showed tiny shrimp copepods. Copepods are added to water, to ingest mosquito larvae, keeping water sources dry. So, can you drink tap water in NYC if it is full of copepods?
Nevertheless, in addition to a significant element of “gross,” the copepods are functionally crustaceans and are therefore not kosher to the great Orthodox Jewish community of the city. Many demands by the Jewish community to “purify” the water and free it from copepods emerged in 2004, but according to the Ministry of Environmental Protection, it was not possible to extract the animals, arguing that the water reservoirs are provided with health benefits due to the presence of the shrimp copepods.

Microplastic contamination has been discovered in tap water worldwide, leading to urgent research calls from researchers regarding health implications.
Many tap water studies from over a dozen countries have been completed by Orb Media analysts who have discussed their reports with the Guardian. Generally, 83% of the tests showed synthetic fibers pollution.

The US had the largest pollution levels, with 94% of plastic fibers contained in tap water tested at locations like conference centers, the offices of the US Environmental Protection Agency, and Trump Tower in New York. The next highest rates were found in Lebanon and India.
Therefore, two major claims were made: very small plastic particles, and the chemicals or microplastics can bring pathogens.
Microplastics may draw sewage bacteria. Several studies indicate that more dangerous contaminants are found in microplastics downstream of wastewater treatment plants. Microplastics often produce and ingest toxic chemicals, and testing on wild animals indicates that they are released into the body.

6. Can You Drink NYC Tap Water with Microorganisms and Other Waterborne Pathogens?

In fact, chlorine doesn’t kill all microorganisms and waterborne pathogens like Campylobacter, Cryptosporidium, E. Coli, Giardia, Hepatitis A, Pneumophila Legionella, and Salmonella.
Knowing the water entering your home has enough residual disinfectant that it will properly safeguard you when it arrives is not a guarantee of 100% disinfection. Degradation of water systems is getting worse year by year. The weakening of the infrastructure is happening with every single storm.
Installing a water filtration system by HighWater Standard will help you to be sure that your drinking water is completely purified and cleared from any microorganisms and pathogens!

Is NYC Tap Water Safe to Drink? How to Provide Your Family with Pure Water?

The water supplied by the water pipe system in New York is constitutional for drinking. Nevertheless, old pipes in old buildings can lead to heavy metals appearing in your tap water. Chlorine by-products are also risky to consume, as chlorine is toxic when combined with organic materials.
Eventually, unregulated pollutants, such as microplastics, can have harmful effects on a person’s health. The use of a water filter in NYC is, therefore, a good measure for protecting your family; especially if you have young children. You will no longer need to be concerned about the safety of your tap water when you install a High Water Standard water filter; the best filter for NYC tap water!
High Water Standard provides robust water treatment services: water filters will be installed fixed and maintained for you. We offer installation of water filters in the larger New York area. Call us today and enjoy your pure, tasty and, most importantly, safe NYC tap water!
I want to know my 💧 situation!

How to Choose a Water Filter for New Jersey
October 12, 2019